Montreal is a stunning Canadian city, located in the French province of Quebec. The beauty of Montreal lies in its cobblestone streets, old port, and the beautiful French remnants. Old Montreal is the oldest part of the city. It has a historical square which is surrounded by the famous basilica, the old port and stunning colorful lanes. We created this ideal one day in Montreal Itinerary and travel guide for you to plan your day. We have captured the best of the city’s old town charm, the downtown area, shops and more so that you can the best of Montreal in a day.

One Day in Montreal Itinerary – Visit Montreal in a day

Montreal is one of the oldest cities to be incorporated in Canada (1604). The name “Montreal” is derived from the hill located in the city, called Mount Royal (or Mont Real). Most of Canada’s recent political history can be traced to Montreal and Quebec, so definitely visiting the museums or the city hall should be on your list. If you are short on time, you can head to the old Montreal part of the city, to re-live some of the French heritage and history.

Get a sightseeing bus tour of Montreal city – make the most of your 1-2 days in Montreal.

Only in Montreal for half a day? Book this afternoon tour of Montreal (5 hour) and make the most of your visit.

Beautiful Heritage. Just beautiful heritage, so French and so elegant.

We started our exploration of Montreal with the older part of the city. Yes, Old Montreal it is.

Start the day at Old Montreal or Vieux Montreal

We arrived in Montreal via Air Canada in the early hours. We took a cab ride to Old Montreal to start exploring the city. The cab fare costs us $30 CAD and we reached Notre Dame Basilica in about 20 minutes. There is metro service available to the Basilica from the airport as well. The closest metro station to all sightseeing spots in Old Montreal is Place d’Armes station.

The beautiful French quarters, the cobblestone lanes and the iconic Notre-Dame Basilica are all located in Old Montreal. This part of the city dates back to the 17th century. In here, you will discover the old port of Montreal located along the Saint Lawrence River, the Montreal Science Centre and the historic Clock Tower.

Notre Dame Basilica is one of the popular Canadian landmarks and also a National Historic Site of Canada . The Basilica is dedicated to Mother Mary. The Basilica’s Gothic architecture is one of the splendid sights in the world.  The structure is constructed of stone and the interior is decorated with golden stars and deep blue colored ceilings. It is filled with hundreds of intricate wooden carvings and religious statues.

The interiors of the church are stunning with stained glass windows.

Right opposite to the Notre Dame Basilica is Place d’Armes.  In the centre of Place d’Armes, lies a monument in memory of Paul de Chomedey, the founder of Montreal. This monument is called Maisonneuve Monument. Its commemorates Chomedey’s defense of the young French settlement against the Iroquois. (The Iroquois or Haudenosaunee are a historically powerful and important northeast Native American confederacy).

Place d’ Armes square is surrounded by other buildings of importance as well like the Saint-Sulpice Seminary (built in 1657), the monument of George III (built in 1773), New York Life Building (built in 1887), Montreal’s first high-rise; the Bank of Montreal head office (built 1859), Canada’s first bank; the Art Deco Aldred Building (built in 1931) and the International style 500 Place D’Armes (built in 1968) 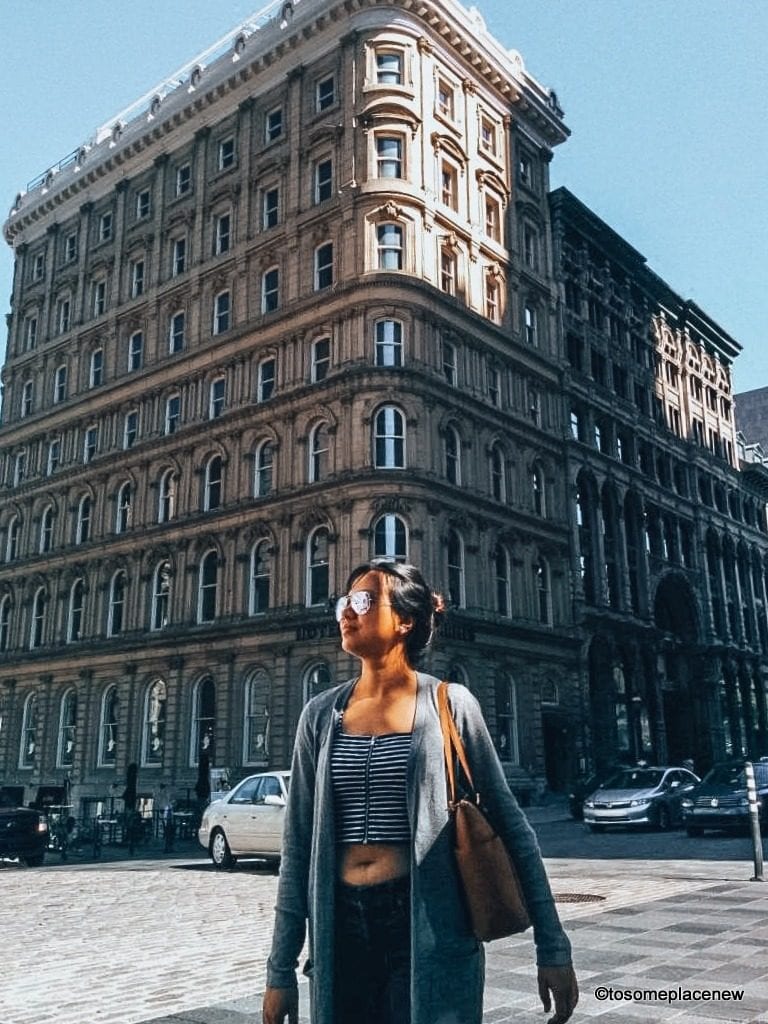 Montreal City Hall is located in Old Montreal.  It is a five-storey city hall, which is the seat of local government in Montreal. Montréal City Hall has a long history – from the stunning architecture, to the fire survival signs to the French President General de Gaulle’s famous slogan “Vive le Québec libre!” (Long live free Québec) in 1967, the Montreal City is an iconic landmark and a testimony to the changing landscape and formation of Montreal today.

You can either admire the building from outside or take a guided tour with a walking tour of Old Montreal.

Pointe-à-Callière Museum is a museum of archaeology and history in Old Montreal, Quebec, Canada. You can visit this museum to learn about the city’s past. This museum was founded in 1992 as part of celebrations to mark Montreal’s 350th birthday.

We loved walking in these areas ~ old French architecture, stories of by-gone days and beauty all around.

This picture below was taken from Old Port. Its called the Notre-Dame-de-Bon-Secours Chapel (Our Lady of Good Help). It is one of the oldest churches in Montreal, built in 1771 over the ruins of an earlier chapel. 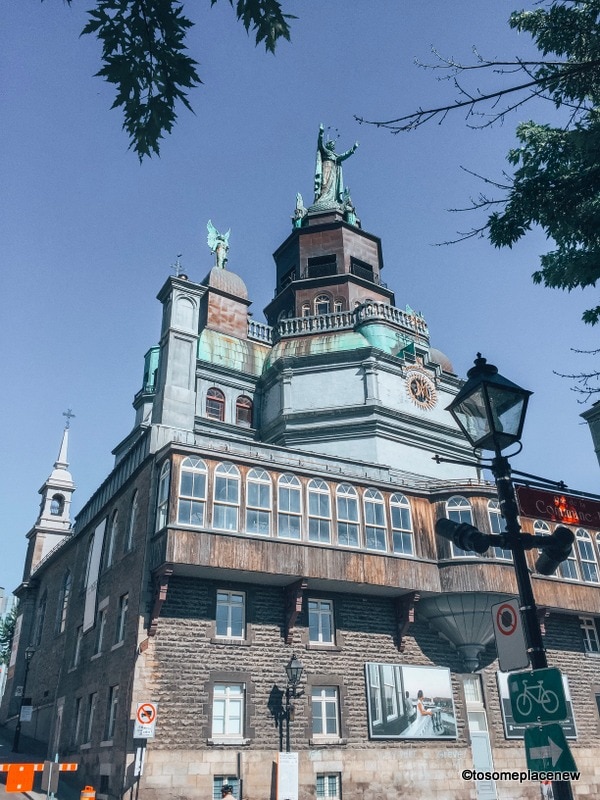 For years, Saint-Paul Street was Montréal’s main street. Its a beautiful street with many 19th century warehouses recently renovated to serve as boutiques, artists’ studios, homes. The street is lined with flags and French art and architectural buildings. This street (rue saint Paul) is paved with cobblestone all along.

You will also find souvenir stores and tons of restaurants at the Rue Sainte Paul, Old Montreal.

Located about 25 minutes from Old Montreal is Downtown Montreal. We walked through old lanes and reached Downtown in 25 minutes. (Its a 12 minute cab ride, if you do not wish to walk)

Just like any other major Canadian city, downtown Montreal had high rise buildings, manicured lanes, shopping centers, some churches and some monuments.

Montreal was home to Summer Olympics in 1976. There is an entire street that is built to commemorate the Olympics.

The Olympic Park was built to host the 1976 Summer Olympics. Today you can visit the Olympics Stadium and admire Montreal’s city-scape from the park’s inclined tower. The inclined tower is one of the highest in the world.

The Olympic Park grounds today are more of a recreational and tourist attraction with sports and entertainment shows, offered to its visitors.

Here is a picture of us by the Olympic House in Downtown, commemorating its Olympic heritage. You can see the sky-rise buildings too (like the Bean or the Cloud Gate in Chicago 🙂 ) 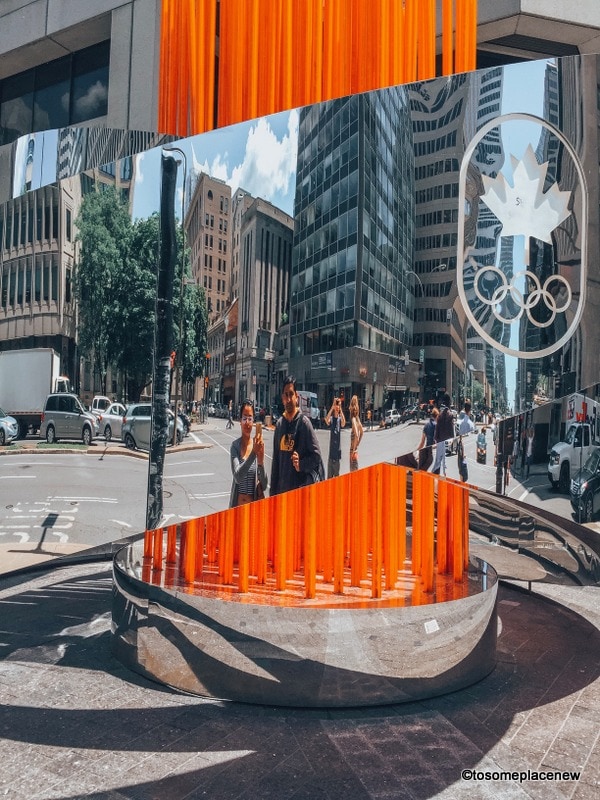 Shopping complex, Complexe Desjardins, is located in Downtown Montreal. This picture is of the shopping mall from inside the building. The day we visited Montreal, Jazz festival – Rio Tinto was going on.

We had an amazing lunch – beer and poutine at Rotisserie St-Hubert. Its located near Complexe Desjardins.

It takes about 9 minutes to reach Mont Royal from Downtown Montreal by car (or a 45 minute walk). Mont Real is located to the west side of Downtown.

The location and the history of Montreal dates back to 1535, when the first European Jacques Cartier arrived in Mont Real, guided by the people of the village of Hochelaga. He named the hill in honour of his patron, Francis I of France and called this mountain Mount Royal. It is also believed that Paul de Chomedey, Sieur de Maisonneuve made a pilgrimage to the top of the mountain in the 17th century. His statue is located in Place D Armes (in Old Montreal).

There are tons of activities to indulge in, at the Mount Royal Park. You can hike up the hill, it takes about 45 minutes to reach the summit (or look out) and from there you can see breathtaking views of Montreal. There is a staircase of 550 steps to reach the top (one way).

If you have additional time on your hand, you can bike around, picnic or just soak the sun and enjoy.

We kept this item on the list for the evening, as you can see the beautiful city lights before you head for dinner.

There are quite a few dining options near Mont Royal. Depending on your budget, we have included a few options here (more options for Food in Montreal below – under the Travel Tips section)

Book a FOOD tour in Montreal!

Here are some more sightseeing trip ideas and additional things to do in Montreal Itinerary.

Take Day Trips from Montreal to nearby cities

If you are extending your stay in Montreal, venture outside the city to explore more of Canada. Here are some day trips from Montreal options for you

Montreal is easily accessible via road and railways. It is very affordable and convenient to travel to Montreal from other major cities of Canada or North America in general. It is roughly 5.50 hours to reach Montreal from Toronto, Ottawa is 2.50 hours away or Quebec city (2.75 hours) or even from the United States.

For visitors requiring a tourist visa, you will have to apply for a visa before arriving in Canada (not a visa on arrival). It is usually applied in your country of residence, with proof of funds and travel plans (or itinerary, hotel reservations to be shown) submitted with your application. Processing times vary by country.

Tourist visa applications and travelers to Canada must have travel medical insurance.

Get travel insurance quotes for your trip here

Canadian Dollars (CAD) are the mode of exchange in Montreal, Canada. Credit cards are widely used as well. Debit or ABM machines can be easily found in the city to withdraw cash.

Canada is a bilingual nation and this is quite prominent in the province of Quebec. Most street or road signs will be in French. This is true for café and restaurant menus as well. So it will be nice to brush up on some French terms.

We didn’t face any difficulty in navigating the city, without French language, as most people were able to help us with broken English.

Where to stay in Montreal Canada?

We highly recommend staying in a central location for your 1-2 days in Montreal Itinerary. Consider staying in Downtown Montreal or in Old Montreal. These areas are close to most of the sightseeing spots, shopping and restaurants.

We recommend using  HotelsCombined.com  to find accommodation. It is our favorite hotels website for quickly comparing the prices of multiple hotel booking sites at once.

What to eat in Montreal? Best Montreal food to try

Montreal is a gastronomic heaven. There are TONS of dishes and food to try in Montreal. Take a food tour to experience what Montreal has to offer. Here are some of Montreal’s finest foods to relish.

Montreal experiences all types of weather. Here is a quick snapshot of seasons in Montreal

Christmas are a magical time in Canada in general. So you will LOVE Montreal for the Christmas season. Montreal gets snow in December, so you experience a WHITE snowy Christmas. There are tons of activities in Montreal during Christmas

Hope you found this post on Montreal Itinerary and travel guide useful. It is one of the beautiful cities in Canada and definite MUST visit in your trip to North America.

PIN- One Day in Montreal Itinerary – Visit Montreal in a day