European microstates (or microstates in general) refers to a sovereign country, with a very small land area and population size. So they are the tiny countries in Europe, worth visiting.

Despite their small size, each of the microstates has maintained their unique characteristics, are rich in terms of GDP per capita, or are tax havens.

Their close proximity to larger European countries (or major cities), makes it easy to explore these microstates in a day trip (or a weekend getaway). 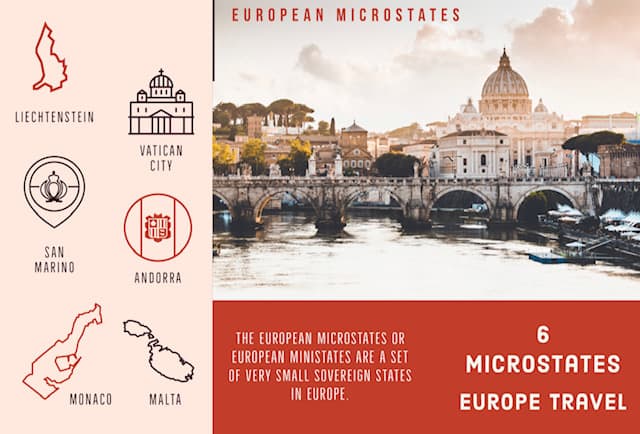 Of all the microstates Andorra, Liechtenstein, Monaco, San Marino, and Vatican City technically are not a part of the European Union. However, they follow customs and economic regulations as outlined by the European Commission, which allows them to use Euro as their official currency.

Only Malta is a full member of the EU. Others have restricted regulations***

There are 6 microstates in Europe.

Principality of Liechtenstein (Visit from Zurich Switzerland or Austria)

Member of EU: Not a member of the European Union

The Principality of Liechtenstein is a microstate, ruled by the Princes of Liechtenstein, with Vaduz as its capital. A country filled with a mountainous landscape, sprinkled with castles and vineyards, it is a must-visit on your trip to Zurich, Switzerland.

Swiss influence is evident in the border control and economic matters of Liechtenstein (they use the same currency: Swiss Francs).

Here are the top things to do in Liechtenstein

✔️ Hike to the Vaduz Castle, soak in those mesmerizing views

✔️Explore the stunning castles in and around Vaduz

✔️ Don’t forget to get your passport stamped in the Tourism Office in Vaduz, Liechtenstein. That’s the only way to get a passport stamp here!

Accessing Vaduz is easier with a day tour or renting a car. Buses and trains (to Schaan, the largest city in Liechtenstein exists), but there are too many transfers.

Andorra is an independent state in the Pyrenees Mountains, and it makes for an easy day trip from Barcelona to Andorra de Vella, it's the capital city. The Spanish Catalan cultural influence is evident in Andorra, with its official language being Catalan.

Visit Andorra for its ski slopes and resorts in the winter. It is an all-year-round destination for shoppers and outdoor activities. It is considered one of the wealthiest countries in Europe.

Here are the top things to do in Andorra

✔️ Visit Andorra de Vella, the capital city of Andorra. Soak into luxury at the spa.

✔️Admire the nobility of time - Salvador Dali in the capital city

✔️ Explore the rustic looking, yet beautiful Romanesque buildings scattered all across the country

✔️ Go shopping at some of the world’s awesome retail outlets

Geographically Monaco is located in the French Riviera and is a popular day trip option from the region. Monaco is known for its famous Formula One Grand Prix event, warm weather, and luxurious vacation resorts.

It is a tax haven, and the second smallest microstate, after Vatican City. The capital of Monaco is Monaco-Ville.

✔️ Admire the Prince's Palace of Monaco’s official residence. It is a Genoese fortress, built in the early 12th century.

✔️ Hit the sunny beaches, Like the Larvotto Beach with a lively promenade

✔️ Other stunning attractions include - Monaco Harbour, Gateway to the Rock, and tons of pretty gardens

Member of EU: No

The Vatican City is the smallest sovereign state in the world, both in population size and land area. Although small, it is home to the Pope, and various landmarks, such as the Sistine Chapel and St. Peter’s Basilica.

It is all about 0.49 square kilometers.

✔️ Visit the largest Christian Basilica - the Papal Basilica of Saint Peter, and walk the square right in front of it

✔️ Admire the Last Judgment fresco, by the Italian Renaissance painter Michelangelo. It covers the whole altar wall of the Sistine Chapel in Vatican City.

✔️ Take a guided tour of the Vatican Necropolis

San Marino is one of the oldest sovereign states in Europe. It is bordered by Italy on all sides, making it quite easily accessible for a day trip to the city.

Malta is a popular winter sun destination in Europe, enjoying the warm company of the Mediterranean Sea. Size-wise, it is the largest of all the microstates. It has ties to the United Kingdom, as well as influences of Arabic culture.

The official and national language of Malta is Maltese, which is descended from Sicilian Arabic and English serves as the second official language.

✔️ Relax at the Valletta waterfront - eat and drink your heart out

✔️ Head to Malta Experience to learn about the country’s history

READ THE LATEST FROM EUROPEAN MICROSTATES