Welcome to Travel Canada – we are so excited you are here! Find all the travel resources, planning tips, and itineraries for visiting Canada.

✔ Canada is the second-largest country in the world, by land area.

✔ Canada is a federal state with 10 provinces and 3 territories. Nunavut is the largest province by land area and Prince Edward Island is the smallest.

✔ Its capital is Ottawa, located in the province of Ontario, which is one of the most populous provinces.

✔ There are 2 official languages in Canada – English and French. French is spoken particularly in the province of Quebec and some parts of Manitoba, rest you will be fine with English only.

✔ A clean and peaceful country, Canada has been our home since 2009. There are study and work opportunities here. And so long as you treat each other well, you will find yourself at home here!

What to see in Canada 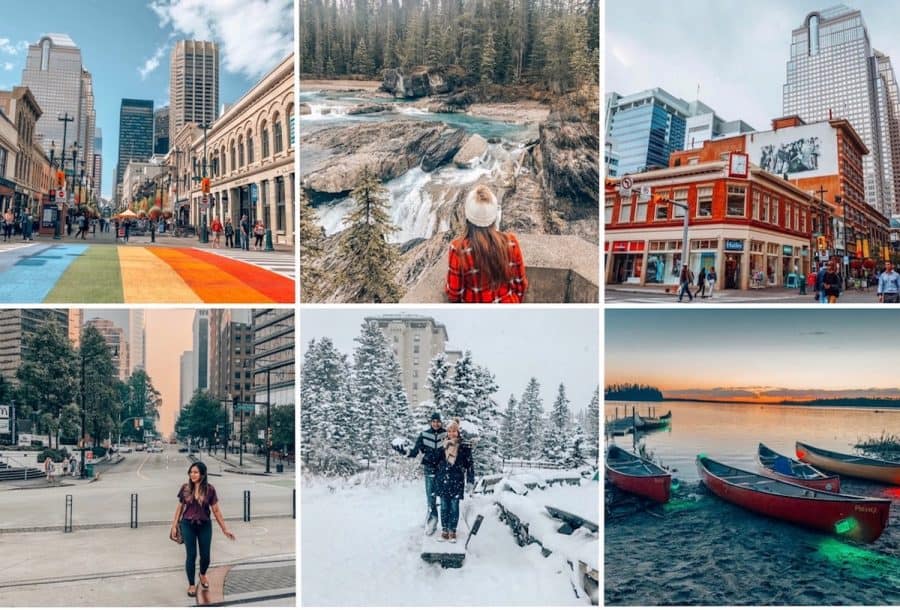 ✔ Visit Canada to check off some of the stunning natural landscapes. Start with the Niagara Falls near Toronto in Ontario.

✔ Explore many provincial and national parks and historic sites. Head to Manitoba to see the Forks where indigenous people met, or view the river valley in Saskatoon, Saskatchewan.

✔ Admire the monuments and cathedrals in the French province of Quebec. During the holiday season, this is the place to be!

✔ Chase northern lights and unique sights in the province of Nunavut or Yukon. A road trip to Whitehorse is still on our bucket list.

✔ And our absolute favorite Banff National Park with its mountain views, turquoise lakes will melt your heart any day! 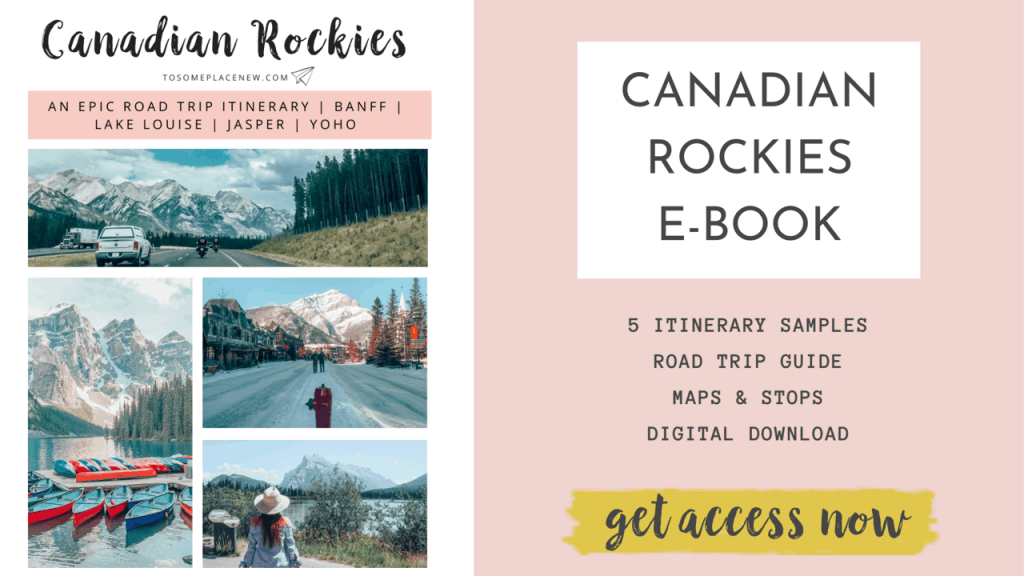 Now, the fun part, we LOVE our coffee and donuts and a friendly banter or a greeting. The country is infamous for being cold – which is true, so here is a Canada winter packing guide for you to get started – but the people here are warm and welcoming!

You know, we are friendly and helpful that way, eh!

Alberta is the fourth populous province in Canada, located in the western part of the country. Considered a Prairie land Alberta is filled with stunning landscape starting with the Canadian Rockies (the likes of Banff and Jasper), the hoodoo badlands, and numerous provincial parks.

Calgary and Edmonton are popular cities with restaurants, heritage museums, universities, and shopping malls. These two cities are home to international airports, that connect Alberta to the world.

The cost of living in Alberta is cheaper than in Ontario or British Columbia.

If you are unsure, where to start preparing for your trip to Alberta, here are some posts to get you started

✔ Calgary – Find a place to stay in Calgary

✔ Calgary to Banff – Get all the transportation tips

✔ Banff Tips – Preparing for your trip to Banff

✔ Banff – An itinerary inspiration for non-hikers

✔ Excursions in the Rockies - Tour of Canadian Rockies

✔ Canmore – Things to do in Canmore

British Columbia or BC for short is the westernmost province in Canada.

Did you know that the name of the province was chosen by Queen Victoria herself when the colony of British Columbia became British in 1858?

✔ British Columbia decided to join the Canadian federation when financial help was offered.

✔ It is Canada's third-most populous province.

✔ The capital city is Victoria. The first British settlement here was at Fort Victoria which gave rise to the City of Victoria.

✔ There are many things to do in British Columbia for nature lovers, campers, and glamping opportunities.

READ: Our weekend itinerary for Vancouver

Ontario is the second-largest province in Canada and is home to our capital city Ottawa and the world-famous Niagara Falls.

Ontario is located in Central Canada, and it is one of the highest populated provinces in the country, bustling with work and leisure opportunities.

The landscape of the province is characterized by numerous historic sites, provincial parks, lakes and rivers, farms and wineries, and remnants of constitutional history.

Ontario experiences all 4 seasons. In general, most of the province’s climate is classified as humid continental. It gets the most lightning strikes per year in Canada (with an average of 34 days of thunderstorm activity per year).

What to see in Ontario

✔ Niagara falls is a must. It can be easily explored in a day trip from Toronto. You can make the most of your stay by visiting wineries – Niagara on the vine.

✔ Toronto is a must-visit. It was our first Canadian city that we ever explored, lived, or experienced. Tons of things to do and see in the city.

✔ Ottawa is the capital of the country. You can visit Ottawa on a day trip from Toronto to explore the highlights or stay there for an extended vacation, either way, you won’t be disappointed.

Quebec is the largest province in Canada by area. A francophone province, French is widely spoken here, and it will remind you of European nuances in a heartbeat.

Geographically located in the eastern part of Canada, but historically and politically it is considered a part of Central Canada.

Quebec experiences all 4 seasons and fall and winters are really beautiful here (especially for photography and outdoor lovers).

The history of the province of Quebec is very unique and interesting, to say the least.

The English and other colonial powers arrived in the region and left an indelible mark on the region. The creation of New France, followed by the Seven Years War impact and the Quebec Act of 1774 led to the status of the province of Quebec, as a “union” or like a nation within a nation.

What to see in Quebec

✔ Château Frontenac in Quebec City is the most photographed hotel in the world.

✔ Quebec City is the second most populated city in the province, filled many iconic landmarks from the Colonial Days.

✔ Montreal is one of the most visited cities in the province and nation, with a beautiful port, food and nightlife, and the iconic Notre Dame Cathedral.

✔ Quebec's highest point at 1,652 meters is Mont d'Iberville, known in English as Mount Caubvick. And there are numerous high peaks and mountainous terrain in the province like the Laurentian Mountains in southern Quebec, the Otish Mountains in central Quebec, and the Torngat Mountains.

✔ June through September and December through February, Quebec is bustling with festivals and celebrations like summer Pow Wows and Winter Carnival – it’s like a piece of Europe in Canada.

Saskatchewan is one of the Prairie Provinces in Canada. With an impressive network of national and provincial parks, lakes, historical attractions and stellar arts facilities, Saskatchewan slowly becoming one of the fastest-growing tourist destinations in Canada.

The province experiences a humid continental climate and is considered to receive more hours of sunshine than any other place in the country. However, you can expect winters to be long and cold.

Once upon a time, Saskatchewan was known as “The World’s Bread Basket,” due to the fact that it produced more than half of the wheat grown in Canada. Its economy also relies on mining, potash, and uranium. Here is what you can explore in Saskatchewan

What to see in Saskatchewan

✔ The province is home to numerous museums and art galleries. Our favorite museums include the Royal Saskatchewan Museum and the Saskatchewan Western Development Museum (learn about this museum in MooseJaw).

✔ Saskatchewan has been populated by various indigenous peoples of North America, and the province has reserves allotted for them. You will find museums and educational centers to understand their past and culture.

✔ There are many historic sites and parks that highlight the coming of the Europeans in hopes of trading fur with the region's indigenous peoples (the Hudson Bay Company), the rise of industrialization with railways, and fur trade development in the province.

✔ Both Saskatoon and Regina have international airports. Both have universities and urban infrastructure. Both cities reflect a balanced way of life, where things are within easy access without the big city hassle of congestion or overpopulation.

✔ Away from the towns and cities are many national and provincial parks that are bustling with activities during summer months for camping, canoeing, birdwatching, and other outdoor activities.

READ ALL THE CANADA TRAVEL POSTS