A major highlight of our Mexico trip was to see Chichen Itza. We were so excited to learn more about its history that we decided to take a guided Chichen Itza tour from Playa del Carmen.

As most of you know, Chichen Itza is known for its Mayan Ruins. It is perhaps the largest, most famous, and most accessible Mayan site, located about 125 kilometres west of Cancun and Cozumel. Rightly so, it’s considered one of the wonders of the modern world. We were intrigued by the history of this place, fascinated by what the ancient Mayans discovered and the sciences that they have preserved over the years.

Chichen Itza is an archaeological site located in the Yucatan region of Mexico. It is one of the most visited locations in Mexico. Known for its rich Mayan history, the entire complex is over 1,000 years old.

The Mayan name “Chichen Itza” means “at the mouth of the well of the Itza.” And as you read along, you will know why!

The main pyramid, called the El Castillo or Temple of Kukulkan is the most popular. There are many other architectural structures in the complex as well that are of historical significance to the Mayan culture and researchers alike.

Getting to Chichen Itza Ruins

There are many ways to get to the historical Chichen Itza complex. You can rent a car and drive ($30-80/day on a mid-size car), use the tourist buses or interstate buses, ADO bus, or book a tour (that includes pick up, drop off, entrance fee and/or lunch with a guide for $50-130+)

If you are staying at a resort in Cancun or Playa del Carmen, it will take you around 2 – 2.50 hours to reach Chichen Itza. The same duration from the Cancun International Airport – if you wish to start exploring as soon as you land. 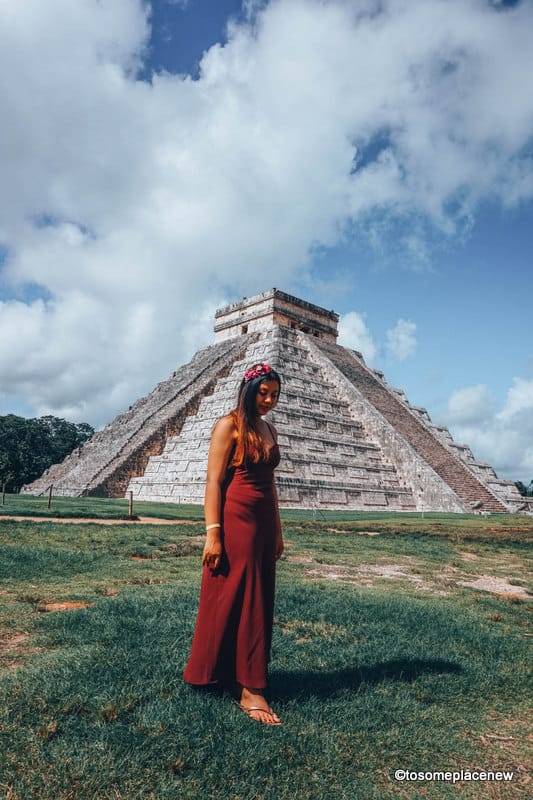 HOW TO GET TO THE MAYAN RUINS?

Things to pack and the best time to visit Chichen Itza

The best time to visit Chichen Itza is from November to March when the weather is not super hot, but just warm. Summer months from late April to July are very hot and peak seasons.

We visited in late September and early October – we found the weather to be perfect and very few crowds. All the photos here were captured with the guided tour.

Items to pack for Chichen Itza

We decided to book a tour with a local company for this trip. The cost of the tour was $75.00 USD per person and included entrance fees to the site, lunch, and pick up/drop off from our Playa del Carmen resort.

The entire tour took us about 7 hours and we were at the resort by 3:30 pm local time, to relax at the beach. Although booked as a group tour, we were given the perks of a private tour, as we were an English speaking group, with the two of us and another couple.

Our guide, Marco, covered everything about Chichen Itza including their history, current events, and initiatives and also included fun activities. 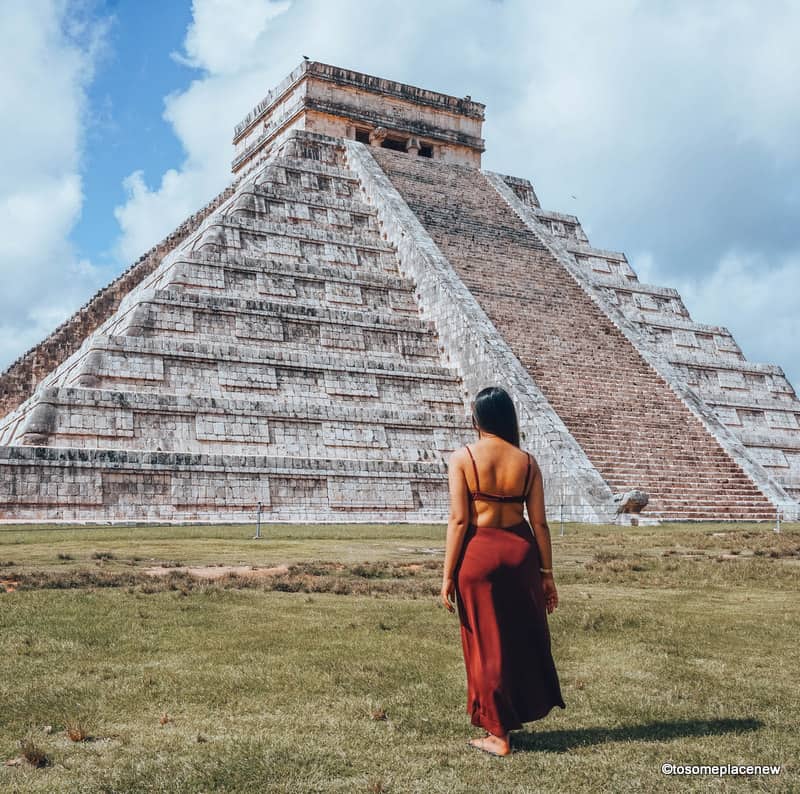 Our tour guide arranged for the passes and we all quite excited to learn more about this beautiful site. Chichen Itza ruins are federal property and the entrance fee is about 232 pesos for an adult. The entrance fee to the site is divided into two amounts, one being the state (culture) and the second being the federal. The land under the monuments had been privately for a long time.

After the entrance gate and just before reaching the main pyramid, you can see water bodies called cenotes. All the cenotes in the region are connected to each other and are considered sacred by the Mayans even today.

El Castillo or the main pyramid

Our tour guide took us directly to the main pyramid of El Castillo. It was bright and sunny that day (September) and we had the entire complex to ourselves. The pyramid is massive. It has 91 steps leading to the top, with figurines of the serpents at the base of the steps.

Few days prior to our arrival (September 22 to be exact) the entire site was filled with tourists, historians, and astronomers to witness the wonderful sight where the sun aligned with the peak of the pyramid and the serpent.

The Autumn equinox as its called, the northwest corner of the pyramid casts a series of triangular shadows against the western balustrade on the north side that evokes the appearance of a serpent wriggling down the staircase.

The El Castillo or the temple of the Kulkulkan dates back to the 9th century. Its believed to be dedicated to the serpent deity, KulKulkan. Each of the pyramid’s four sides has 91 steps.

In the past, tourists were allowed to climb up the steps and reach the top court, but not anymore. The 91 steps on each side sum up to a total of 365 (including the temple platform on top as the final “step”) which represents the 365 days of the year.

I was so fascinated with such scientific facts that it was mind-blowing, to say the least. The Mayan civilization is one of the oldest civilizations of the world and they were so far ahead in terms of science and astronomy. They built such structures without the use of many instruments or metals of any kind.

They were great observers of nature and believed in recording everything. They recorded the change in seasons, time, and reasons for why certain events occurred and how to resolve them. The only thing they didn’t record is “how” they built these massive and accurate astronomical structures.

As you walk away from the main pyramid you will see a whole area full of columns. This area is called the Temple of the Warriors.

The Temple of the Warriors

The Temple of the Warriors is a three-level pyramid with neighboring colonnades on two sides creating a semi-enclosed court. The building at the top of the pyramid has a doorway framed with feathered-serpents and two chambers; one contained a chacmool and the other a throne.

Buried within the base of the temple is another, the older structure is known as the Temple of the Chacmool. The interior walls of the temple were decorated with wall paintings showing scenes of warriors with captives, a lake, and thatched houses, all with some attempt made at achieving perspective.

The total number of columns here is 260, signifying a total of 260 days in the Mayan cycle.

To summarize this theory in general, it is hereby put forward that the Maya specifically created, or rather invented, a 260-day cycle in order to allow them to accurately track the occurrence of successive conjunctions involving the Earth and Venus, over a full 2000 year grand cycle.

So that this might be achieved, the 260 day period of the Mayan calendar was further combined with a basic Earth year of 365 days, as a means to generate an extended 52 year period of time.

The Mayans regarded the number 13 and 9 as very scared. Considered as a sacred number, the number 13 is synonymous with a spiritual connection with the Great Architect of the Universe(God). The number 9, refers to the 9 planets, deities, and worlds in Mayan civilization.

Archaeologists have identified thirteen ballcourts for playing the Mesoamerican ballgame in Chichen Itza.

The Great Ball Court located to the north-west of the Castillo is the most impressive of all. The parallel platforms flank the main playing area and the walls of these platforms stand are set high up in the center of each of these walls. There are rings on them, carved with intertwined featured serpents.

At the base of the high interior walls are slanted benches with sculpted panels of teams of ballplayers. We discovered something very interesting in this ball court area.

Depending on what spot you stand on you can actually hear some whispering something from one end of the site to another. So, if you are standing at the base of the courtroom facing them, you can hear your teammate whispering from the end of the ball-court.

In and around the ball court area, you will find a lot of structures dating different historical periods. Some of the structures are in poor shape, almost most of them have also lost the color (historians believed it was red in color).

Some of the other structures include – the Platform of the Eagles and the Jaguars, the Platform of Venus (dedicated to the planet Venus), the Temple of the Tables, the Steam Bath  ( a unique building with a water bath and a steam chamber operated by heated stones) and lastly a causeway leading to the Cenote Sagrado nearby.

The Osario pyramid and Temple of Xtoloc

The Osario is a step-pyramid temple dominating its platform. There is a temple on top which leads to a natural cave 12 metres (39 ft) below. There many several skeletons and artifacts such as jade beads, found in this area.

Archaeologists believe neither that the structure was a tomb nor that the personages buried in it were priests.

There is a temple located outside the Osario platform as well. It overlooks the other large cenote at Chichen Itza, named after the Maya word for iguana, “Xtoloc.” The temple contains a series of pilasters carved with images of people, as well as representations of plants, birds, and mythological scenes.

The image below is situated at the end of the ball court. This seat was for the ruler and a “guest” who would then watch the players display their game.

Being a religious and ceremonial site, all the ball games were used for worshiping purposes. The winner of the ball-game is sacrificed to the Gods to keep them happy. The winner was chosen as he is considered the best of the breed. It was a matter of pride to be sacrificed.

Chichen Itza was more than a religious and ceremonial site. It was a sophisticated urban center and a hub of regional trade.

Today you can wander and marvel at the sophistication at which the Mayans built this place. The Mayans believed that knowledge is power. They were great observers of nature and seasonal changes. They recorded and recorded everything they saw and achieved perfection in their skills.

Our guide said (Marco, archaeological guide), “As long as you set your heart in it, you will succeed, just like the Mayans did”.