Nuremberg is a medieval city located in Bavaria in Germany. It is super easy to take a day trip to Nuremberg from Munich. Nuremberg is known for its medieval architecture like the Altstadt (Old Town), Kaiserburg Castle, the Hauptmarkt (central market-square), the Frauenkirche (Gothic church) and the Pegnitz River-canal (Fleisch Bridge). Other then the beautiful buildings, Nuremberg is famous for its Christmas markets (in Hauptmarkt). Read to find all about our Munich to Nuremberg Day trip itinerary.

Nuremberg is the English name for Nürnberg – the second largest city in Bavaria state of Germany.

READ: Our 5 days in Munich Itinerary

The journey from Munich to Nuremberg is 2 hours long via road. Trains are very frequent in the Munich – Nuremberg and back route.

Trains – It takes 1 to 1.25 hours to reach Nuremberg from Munich via the fastest train. You can start the day trip to Nuremberg as early as 04:00 am and then leave the medieval city at 08:00 pm to return to Munich. Train fares start at $25 USD+ one way.

Tour Guide – You can take a tour to Nuremberg from Munich by train. Guided train tours start at $65 USD+

Bus tours are also a great way to explore the medieval city of Nuremberg. You will be taken to Nuremberg in a bus, a walking tour of the old town is included with ample free time to explore and eat your heart out. And then depart in the evening. Guided tours start at $75 USD+

CHECK THIS TOUR HERE > Day tour to Nuremberg from Munich.

Nuremberg is known for its mighty imperial castle, stunning old city walls, the canals as well as half timbered houses that still depicts a life that’s living under the spell of the medieval imperial grandeur.

Pro Tip:
If you are arriving in Nuremberg by train and have not planned any sightseeing, then take this 2 hour walking tour in old town to maximize your time in the city.

If you are like me, you will definitely like to walk around with fresh coffee and flowers in hand, in this beautiful town. The charming old town is covered in cobbled stone lanes and has a very romantic vibe in the air.

The old town is very pedestrian friendly, and you can start your sightseeing (or meet the guided tour ) from the main train station. Walk along the street – Koenigstrasse and you will end up at the Imperial Castle.

Before reaching the castle, you will see many important attractions on the way.

Frauentorturm or the Women’s Tower

As soon you reach closer to old town Nuremberg, you will be greeted by the Fleish Bridge.

The Fleisch Bridge is a late Renaissance bridge that crosses the river Pegnitz in the center of the old town, linking the districts St. Sebald and St. Lorenz along the main market. The single-arch bridge was built in the 16th century. From the Fleisch bridge you can start exploring the city. There are small markets located parallel to this bridge.

As you walk towards the heart of old town, you will see an old customs house – Mauthalle and many open air markets along the way.

The Church of our Lady – The Frauenkirche

Located at the helm of the Nuremberg market square is the Church of our Lady. This church is SOO stunning and beautiful to look it.

The Frauenkirche (“Church of Our Lady”) is a Gothic church situated on the eastern side of the central market-square. The church has a mechanical clock (the Männleinlaufen) that commemorates the Golden Bull of 1356. The church’s balcony is used for the opening ceremony of the Christkindlesmarkt (Christmas Market).

If you are visiting Nuremberg during Christmas season, then I am SOOO jealous. I heard the market square is decorated beautifully for the holiday season and the Nuremberg Christmas markets are the BEST in Europe!

Visiting Nuremberg during the Christmas season? Check out this tour

The Hauptmarkt is the central market-square. Flowers, food stalls, hand-made items are sold in the market area. Nuremberg’s Christkindlesmarkt (Christmas Market) is located here and it draws a lot of tourists for its Christmas ornaments and delicacies.

Schöner Brunnen is the beautiful Gothic fountain in the central square in Nuremberg. It was built in the 14th century and the 40 colorful figures that adorn the fountain represent the world view of the Holy Roman Empire. The beautiful fountain in the market-square is a replica that was placed here in the early 20th century.

It is very beautiful to look at.

After some sightseeing, definitely make a stop at one of the cafes or food stalls to try some Nürnberger bratwurst or sausage – they are fried and deliciously good (but loaded with calories. Well everyday is a cheat day when you are on vacation!) 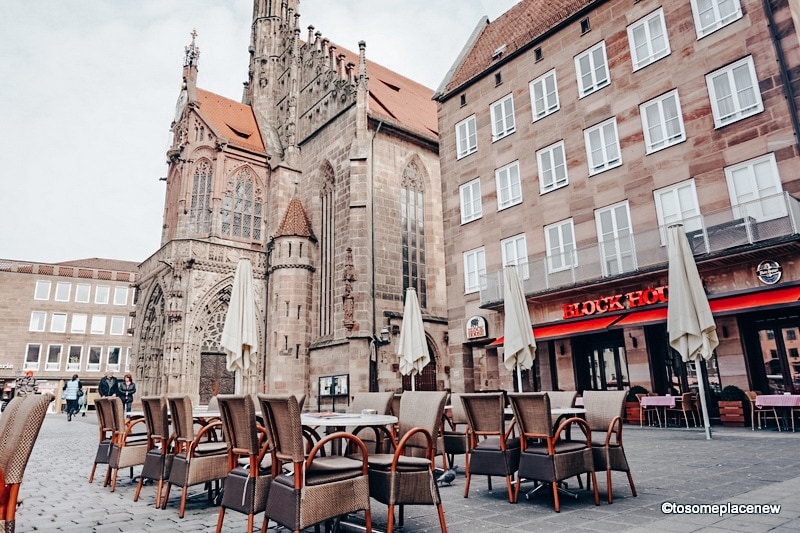 Nuremberg is also known for its traditional cuisines, so if you LOVE food, then definitely take a culinary tour for 90 minutes. You will discover the savory side of old town in this tour! BOOK 1.5 Hour culinary tour here

You might also like this brewery tour which includes sightseeing highlights like the Albrecht Dürer’s House, the Imperial Castle, and the main market square > 2 hour brewery tour visiting 2 breweries and beer samples

The Nuremberg Toy Museum, as the name suggests is a toy museum. It highlights the 600 years of doll-making history. And that’s why its considered to be one of the most well known toy museums in the world. Definitely a must visit, if you love toys and if you have enough time on your hand!

Admire the City Hall of Nuremberg as you take a stroll on the cobblestone lanes. This building was destroyed due to bombing in the Second World War. 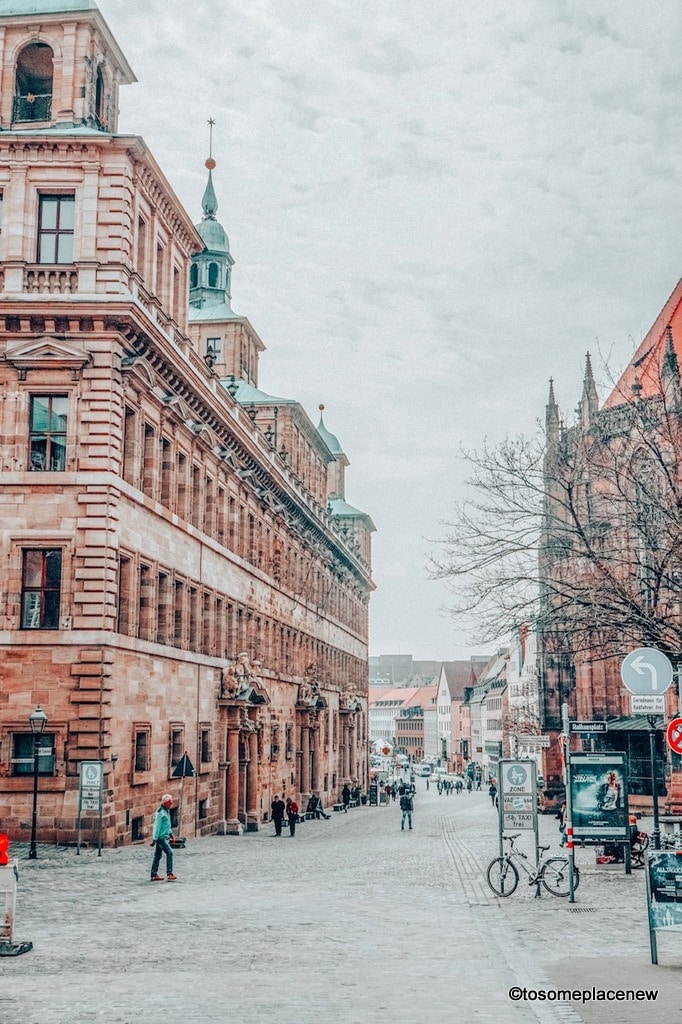 The Nuremberg Rathaus or the town hall was rebuilt  in the late 1950s and is now a beautiful evocation of the German Renaissance. Inside the city-hall are offices, a restaurant and dungeons which are open to visitors. It is a popular photo spot and is definitely worth seeing.

The Imperial Castle of Nuremberg consists of fortified buildings that comprises of the historical center of Nuremberg. The castle and its fortifications are one of Europe’s most formidable medieval fortifications, depicting the power and importance of the Holy Roman Empire.

The Kaiserburg Castle was built in the 11th century, and had been home to every Holy Roman Emperor for the next 500 years.  The castle was built on a large sandstone rock and was completely destroyed after the World War II bombings and was later re-built back to its medieval charm. The castle complex consists of a deep well, imperial chambers, a double chapel and the Sinwell Tower which was built in the late 13th century and served as a defensive fort.

The castle was an important seat of the Empire’s administrative functions.  Many trade and commerce related decrees were passed here. Both the courts and the Imperial Diet or the Reichstag met at the Nuremberg Castle.

You can easily spend 2- 3 hours here at the castle grounds including taking a stroll at their beautiful gardens. 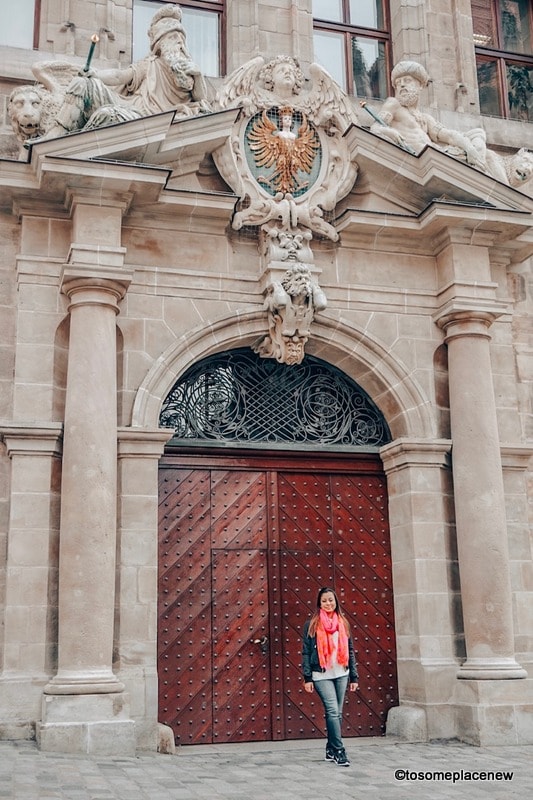 Nuremberg is also home to Germany’s most famous painter, Albrecht Dürer. He worked and lived in Nuremberg for almost twenty years. In the old town Nuremberg you can visit his house – the artist’s only house dating back to the 16th century.  This house is located just a few steps away from the Imperial Castle.

In the tour mentioned above, you will be taken to the Imperial Castle as well as given a tour of Dürer’s house. The five-story house serves as a museum and is dedicated to Dürer’s life and work.  In this informative tour, you will also learn about how Nuremberg was, in the 15th – 16th centuries.

Other then being a charming medieval town, Nuremberg also has a dark phase of history. Nuremberg saw the rise and fall of the Nazis. The Nazi party conducted many rallies in the southeast part of Nuremberg. There is also a memorial – Memorium Nürnberger Trials – an exhibition about the post-WWII Nuremberg trials of Nazi war criminals. 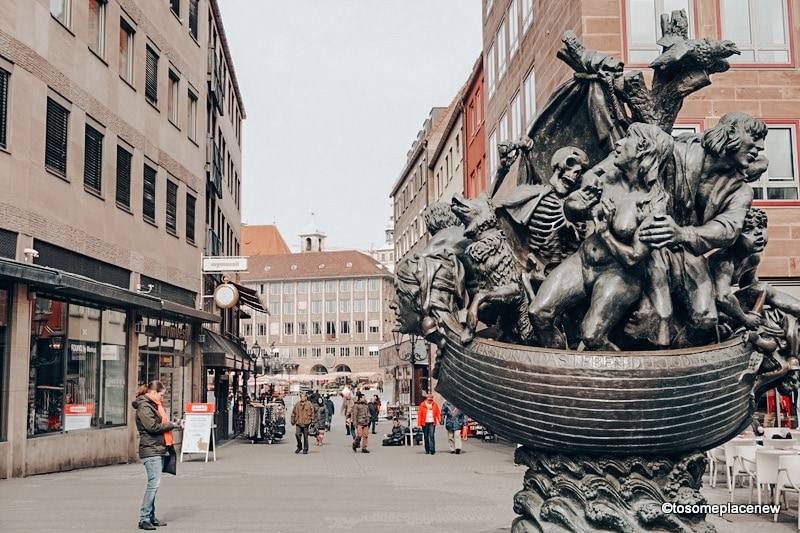 Nuremberg saw the Nazi brutality and also saw its end and recovery process with the Nuremberg trials. All the pages of dark history are located in about 11 square kilometres in the southeast of Nuremberg, and this is where 6 Nazi party rallies were held between 1933 and 1938.

The Congress Hall (Kongresshalle) is a historic landmark and it was initially built to serve as a congress centre for the Nazis with seating arrangements for 50,000 members. The building was inspired by the Colosseum in Rome. Although the foundation stone was laid in 1935, the building was never completed. Today it houses the Documentation Center Nazi Party Rally Grounds, with the permanent exhibition Faszination und Gewalt (Fascination and Terror).

The Documentation Center Nazi Party Rally Grounds  (Dokumentationszentrum Reichsparteitagsgelände) was a Third Reich Meeting place, and today it is a museum. Through its exhibitions (most notable one – Fascination and Terror), it showcases the dark period of Germany’s history and also sheds valuable light on the Nuremberg Trials that took place here after the Second World War.

Nuremberg’s Palace of Justice is where the 1945 Nürnberg trials were held.

A former World War 2 Art Bunker is also located here, which is now an art gallery.

Our trip to Nuremberg was for a day, so we didn’t stay in any hotel. Should you decide to extend your trip and stay overnight, then we have a few recommendations for you. The hotels listed below are based on traveler reviews and our own research. We recommend using  HotelsCombined.com  to find accommodation. It is our favorite hotels website for quickly comparing the prices of multiple hotel booking sites at once.

Average hotel rooms will cost you about $100-150 USD for mid range accommodation in Nuremberg.

Nuremberg is a great option for a quick day trip from Munich. The city has a very Gothic-medieval feel to it. Its tourist friendly and there are lots of sight-seeing options to keep you hooked.

Pin This for Later – Munich to Nuremberg Day Trip Itinerary